Another day started with a group prayer meeting at 6:30am. Brethren from various units came together to pray for wisdom and guidance in the work to be done for the day.

Worship
Morning worship was conducted by Br D. Dumitru and he spoke on the topic “Love and Justice harmonised.” He pointed out that believing in Christ and receiving His transforming grace is not guesswork, but a work which causes Christ’s virtues to be reflected in mind and character. He also appealed to the delegates to make a full surrender of their will to the will of God and accept His plan for us. 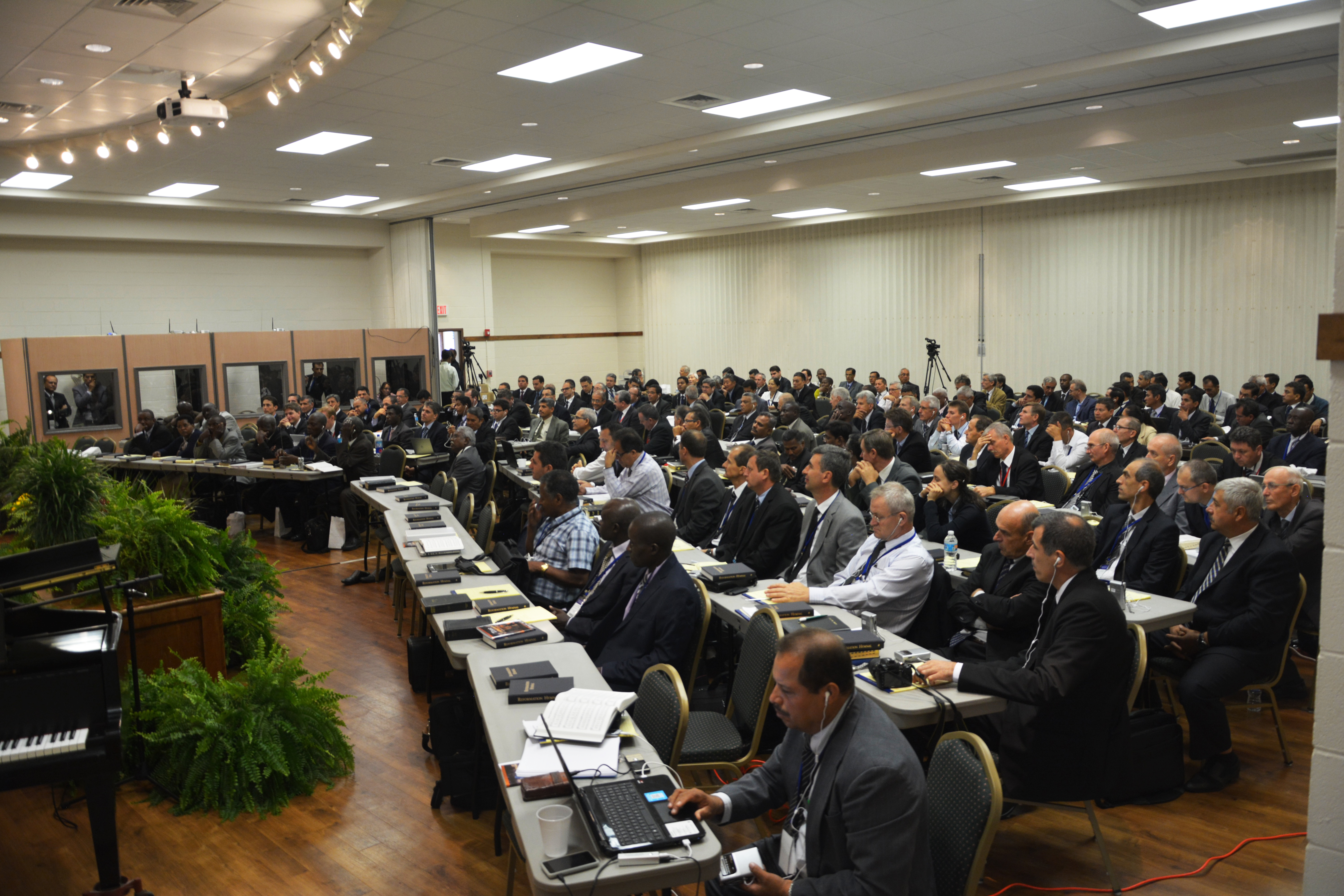 Worships are the highlights of the day

The business of the day
The session began at 9:00am with a song from the “Reformation Hymnal” entitled “O Christian Awake”, followed by the prayers of brethren S. Suceava and A. Mariceanu. Br Sureshkumar delivered a message on the topic of our responsibility as leaders of our church. His thoughts shared with the delegation focused on 2 Timothy 2:19, 20: “Nevertheless the foundation of God standeth sure, having this seal, The Lord knoweth them that are his. And, Let every one that nameth the name of Christ depart from iniquity. But in a great house there are not only vessels of gold and of silver, but also of wood and of earth; and some to honour, and some to dishonor.”

He also spoke on the solemn responsibilities that rest on the leaders of God’s church. He also made an appeal with the following quote from the book “Gospel Workers”, page 342, “The people will seldom rise higher than their minister. A world-loving spirit in him has a tremendous influence upon others. The people make his deficiencies an excuse to cover their own world-loving spirit. They quiet their consciences, thinking that they may be free to love the things of this life and be indifferent to spiritual things, because their ministers are so.”

One hundred and seventy one delegates assembled for the day’s business and the minutes from Thursday the 27th of August were read and accepted. The session accepted the four delegates from the Philippine Union Conference who arrived late due to delays in obtaining their visas.

Laodicea and the Reform Movement
The first order of regular business was the discussion of the proposal of the doctrinal committee concerning the placement of the Seventh Day Adventist Reform Movement within the prophecy of the seven churches. After nine delegates spoke in regard to the motion the proposed statement was put to the floor for vote. An overwhelming majority of the session approved the following understanding of the question.

WHEREAS the issue of the placement of the Reform Movement within the prophecy of the seven churches was discussed by the General Conference Delegation Session (#52/2003) and was passed to the Working Doctrinal Committee, it was RESOLVED, that we acknowledge that the prophecy of the seven churches represent Christ’s church living in different periods of the Christian era, and that the Reform Movement, as the remnant church of Christ, is living within the period of Laodicea. The counsel of the Faithful Witness applies to each individual who desires salvation. It is our duty to accept this message personally and it is our mission to preach it to the whole world. Those who overcome during the Laodicean period will be granted to sit with Christ in His throne.

It was FURTHER RESOLVED, that there is a difference between a person or denomination living in the last period of the New Testament church who have a tendency to fall into the condition described in the message to the Laodiceans receiving the message of warning and hope, and between those who actually come to the point of being spewed out. The missionary outreach programs or other religious exercises of an individual or denomination that is spewed out of the mouth of Christ are not accepted before God.

It was FURTHER RESOLVED, that we continue as a people, to recognize our spiritual need of this most precious message of Christ Our Righteousness as it began to be presented in 1888. “The message which the messengers have been proclaiming is the message to the Laodicean church. [Revelation 3:14-20, quoted.]”—Ellen G. White 1888 Materials, p. 1051; The acceptance of this message is made manifest in the obedience to all the commandments of God as it accomplishes the needed reformation among those who are preparing for translation. As the church of God in the last period of the Christian era, the important counsels of each of the seven churches are to be accepted.― “I call upon our church members to read the whole of the third chapter of Revelation, and to make an application of it.”

“The names of the seven churches are symbolic of the church in different periods of the Christian Era. The number 7 indicates completeness, and is symbolic of the fact that the messages extend to the end of time, while the symbols used reveal the condition of the church at different periods in the history of the world.”—The Acts of the Apostles, p. 585; Testimonies, vol. 6, p. 77. 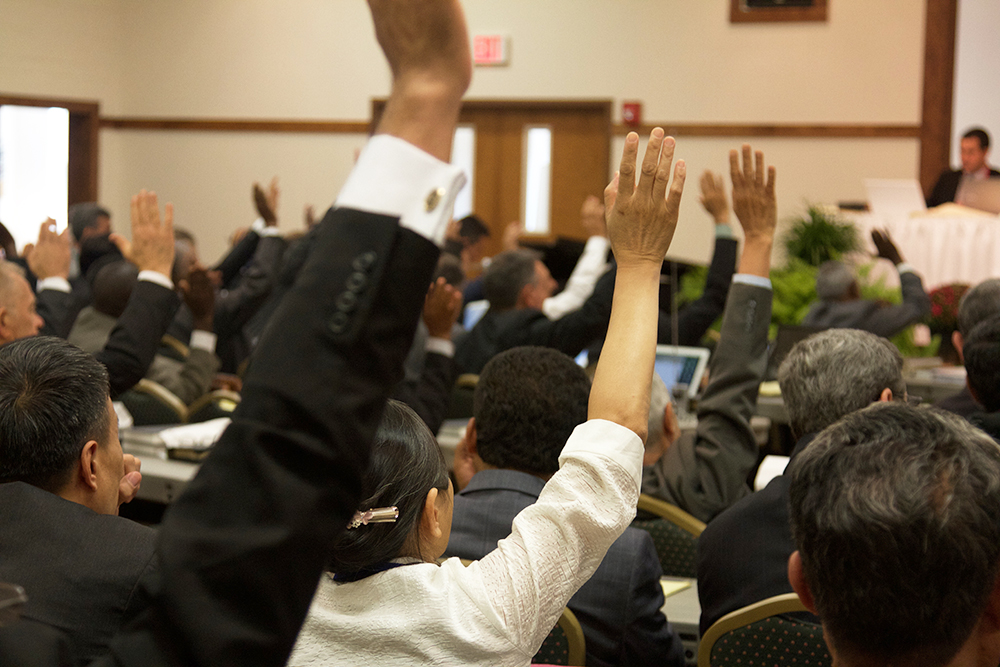 Attitude Toward Euthanasia
After this the doctrinal agenda point on Euthanasia was considered by the session. A small amendment was made for clarification and the following position statement was adopted.

WHEREAS God is the Life giver, and it is not the right of anyone to take human life, it was RESOLVED, that the practice of any human being intentionally ending a human life in order to relieve pain or suffering (euthanasia), is contrary to God’s will (Exodus 20:13). As Christians, we are not to request or consent to euthanasia nor should we be involved in the so-called mercy killing of another human being.

It was FURTHER RESOLVED, that we believe that every human being has a personal human right to either choose or refuse medical treatment for any ailment, including terminal illness.

Davi Paes Silva Elected as President
The day’s proceedings concluded with the election of the President. The nominating committee after much prayer and consideration informed the session that they had nominated three candidates for the office of President. After one round of voting Br Davi Paes Silva was elected as President of the General Conference of the Seventh Day Adventist Reform Movement. Br Silva thanked the session for their vote of confidence in him and shared a short message of exhortation. 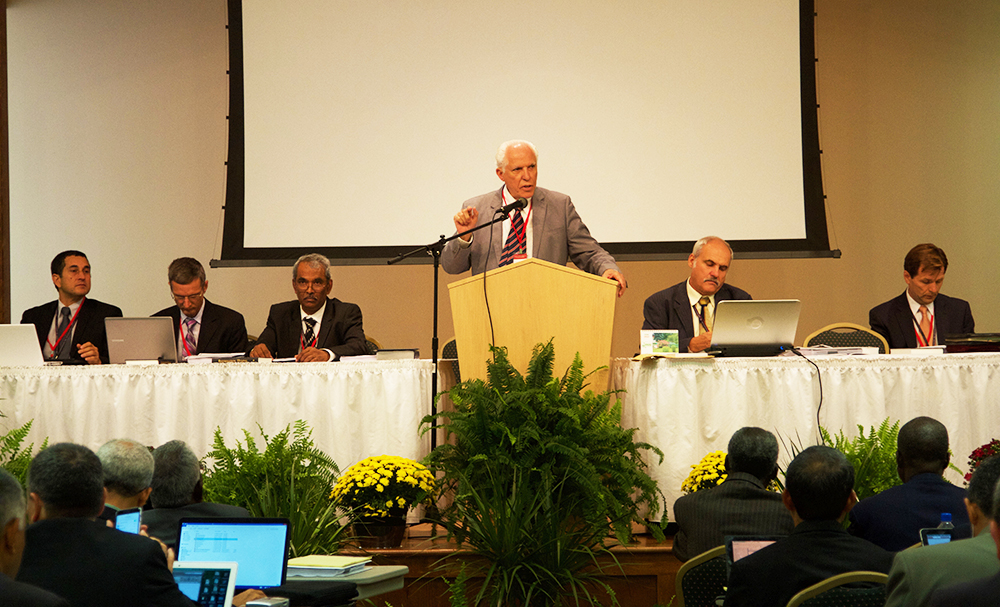 Br Silva’s addressing the session after he was reelected

Dear Brethren, I am very thankful to the Lord because we see that the Holy Spirit is working in the session and I am conscious, that we have a big task before us, and that by ourselves we can do nothing.

I understand that those who voted made a commitment to support us in the work. We have no idea how to work by ourselves with our small team, but we depend first on God’s grace. We depend on the baptism of the Holy Spirit.

As we travel around the world, we see that we have much to do. We have many problems to solve. But if we get closer to the Lord, if we make a complete surrender of our life to Him, if we keep a connection with Him the whole time, for sure God’s people will be victorious very soon.

Brethren, when we think that the message of the Seventh Day Adventist Church started in 1844, how many years have passed already? When we consider 1888, more than 120 years (have passed) and we are still in this wilderness.

Otherwise, brethren, we don’t know how many years we will still walk in this wilderness. I don’t know, but we need to make a decision — not a resolution — but we need to decide by ourselves here, to seek the Lord with our hearts. Our connection in our life should include all the departments in our life.

A question, brethren: Are we walking in the light that we know?

I would like to read some Bible verses. Isaiah 55:6 & 7, “Seek the Lord while He may be found, call on Him while He is near. Let the wicked forsake his way, and the unrighteous man his thoughts: and let him return unto the LORD, and he will have mercy upon him; and to our God, for he will abundantly pardon.”

Brethren, besides surrendering our life to Christ we need to do something else. We need to remain in Him. Colossians 2:6 &7, “As ye have therefore received Christ Jesus the Lord, [so] walk ye in him: Rooted and built up in him, and stablished in the faith, as ye have been taught, abounding therein with thanksgiving.”

Brethren, in Revelation, chapter 14 we find the description of the character of the 144,000. “And I looked, and, lo, a Lamb stood on the mount Sion, and with him an hundred forty [and] four thousand, having his Father’s name written in their foreheads.”

His character is impressed in our life. Verse four says, “These are they which were not defiled with women,” which means they kept themselves pure – these people have a pure doctrine.

They follow the Lamb wherever He goes. The Spirit of Prophecy says if you want to follow the Lamb to Mount Zion we need to follow Him today. It is not enough, brethren, to dream about salvation. Salvation depends on a vital connection with the Lord the whole time, and verse 5 says, no lie was found in their mouth, they are blameless.

Now, brethren, God’s people have a work to do. We find in Revelation 18, “And after these things I saw another angel come down from heaven, having great power; and the earth was lightened with his glory. And he cried mightily with a strong voice, saying, Babylon the great is fallen, is fallen, and is become the habitation of devils, and the hold of every foul spirit…”
Now in verse four, “And I heard another voice from heaven, saying, Come out of her, my people.”

Compared with the denominations of the world we are just a very small number. How can we do this ourselves?

Dear Brethren, we have a great responsibility before the Lord. Let us seek the Lord with all our hearts. I count on your prayers in my behalf and on the behalf of my team that will be chosen later.

I would like to appeal to you, please, brethren, let’s take seriously our calling. Let us struggle with the Lord as Jacob, so that our name can be changed to “Israel”, an “overcomer”.

I have a question for you, how many of you are willing to pray for us?
(A raising of hands.)

Thank you very much, brethren.

The meeting concluded at 12:42 with the prayer of Brethren M.Valerio and M. Ponce